To be blind is not miserable; not being able to bear blindness, that is miserable. ~ John Milton 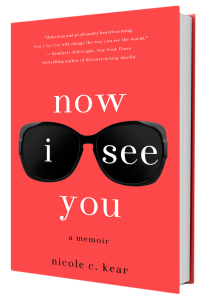 Back in New York after her sophomore year at Yale, recently single Nicole receives life-altering news from an ophthalmologist. At the young age of nineteen she is diagnosed with retinitis pigmentosa, a degenerative retinal disease, and is informed she has between ten and fifteen years before the lights go out. Resolving to keep her eventual blindness a secret from everyone but her family, Nicole endeavors to employ the age-old adage of carpe diem. In her quest to see and do everything she can before the darkness descends, Nicole finishes college, attends circus school, falls in love and attempts to live a glamorous life in Hollywood. However, once Nicole gives birth to her son, she knows she can no longer keep her encroaching blindness at bay and attempts to come to terms with her situation while trying to lead a normal life.

Nicole C. Kear, author of the memoir Now I See You, relates her story to the readers in an uplifting and humorous fashion. My favorite aspect of this book is that it is laid out as a series of tips for “the secretly blind”: “Tip #4: On Smoking… Never light your own cigarette. You risk revealing your hidden handicap when you keep on missing.” Nicole highlights her struggle with the simple tasks we all take for granted and throughout the book she expertly doles out advice on the mundane, such as how to navigate handshakes and glass doors: “Tip #18: On glass doors… Walk into a glass door once, shame on the door. Walk into it twice, shame on you. Walk into it three times, get yourself a fucking game plan.” I did, however, take issue with the authors stubborn insistence on not informing people about her deteriorating sight, especially with the limitations it put on her.

The majority of this book is concerned with the themes of denial and fulfillment. Amid glorious trips to Italy and a string of one-night-stands, Nicole throws caution to the wind, often times denying her condition altogether. However, after a near-death experience, attempting to step out a window onto a fire escape that isn’t actually there, she realized she was no longer in charge of her life, the disease was. While making concessions to her condition, such as giving up her driver’s license and avoiding gatherings around large bodies of water, Nicole still lives her life to the fullest, even swimming in the Aegean Sea at midnight. The book ends on the theme of acceptance with Nicole even learning how to properly use a cane.

Nicole’s story is truly inspiring and reminds us that it is okay to admit when you need help; that our shortcomings don’t always have to be handled with an overabundance of pride. She also reminds us that we need to take the time to appreciate the beauty we can see.

a native New Yorker who received a BA from Yale and an MA from Columbia. She is a freelance article writer, has a continuously running column in the Park Slope Reader titled “Dispatches from Babyville”, and writes a blog titled A Mom Amok.

Purchase Now I See You at Barnes and Noble.